Check out the new reveal trailer for Soul Calibur V!

will not be appearing this holiday season.

posted the following quote on their official Facebook page.

“Mass Effect 3 will be released in the first three months of 2012. The development team is laser focused on making sure Mass Effect 3 is the biggest, boldest and best game in the series, ensuring that it exceeds everyone’s expectations.”


While this may be sad news for fans of the series at least you know that BioWare is making an extra effort to deliver a high quality game for gamers. They’re integrating Kodi into the game and it’s taking some development time (kodi download here)  We will keep you updated on any more news concerning the Mass Effect 3 release date.

I loved making Machinima projects with Treezy on Uncharted 2 we made some funny skits like Epic Elimination Ownage , Coleslaw Face and my favorite A Killer’s Instinct

. I was in charge with capturing the footage and even with Naughty Dog’s beast Machinima Mode in Uncharted 2 I hated that it did not have a rewind button.

I made a video suggesting to Naughty Dog to add a rewind button to make the capturing experience easier. Today I got a tweet from Kurt Margenau saying they added rewind and was super excited, so excited I wet my pants literally.

New Ratchet & Clank All for One Screenshots + Artwork

Check out these colorful screenshots for Ratchet & Clank All for One (click pictures to expand).

Today was an amazing day! The good fellas from

and I headed into

media day event. We got to enjoy an open bar, fresh appetizers, and of course some

missions. There were several demonstrations available and I got to get some hands on time with a few of them. I was highly anticipating a boss battle with the mysterious and powerful

, but unfortunately he didn’t make an appearance today. Here are some of my first impressions on what I played today.

The first mission I played was with Cole fighting a huge behemoth in downtown New Marais. This had to be my favorite demonstration of the evening. First off the gameplay is extremely smooth and well put together. There were moments in inFAMOUS when Cole was a little difficult to control, but in inFAMOUS 2 it is fairly easy to navigate Cole with grace. Fighting the behemoth is one word…. epic! Just imagine a huge beast spitting enemies out at you while trying to suck you inside of it’s chest with it’s tentacles. There was one moment when I was actually being pulled towards the mighty beast and I had to frantically aim at his chest and shoot his weak points before he completely owned me (needless to say I failed). The best way to describe that moment is that it resembles the final boss battle in Dead Space.

Fighting with Cole is simple and the control layout from the previous game appears to be about the same. I deeply enjoyed the graphics and I love how Sucker Punch is putting that God of War 3 feeling into the game by meshing cutscenes with actual gameplay. The environment surrounding Cole is a beautiful yet destructible one. It is fascinating to see a city with such beauty get torn up in seconds by a giant monstrous beast. When I finally took down the huge creature I felt a great sense of accomplishment (which is very rare for me to feel in video games nowadays). Sucker Punch has definitely done an amazing job with making the player feel deeply immersed into the action. After playing the level I can safely say that inFAMOUS 2 will definitely be a major contender for GOTY.

After talking with a few people about how much I enjoyed the level I moved on to the next demo that was available. In the next demo Cole had his evil karma intact and was kicking some serious ass. The object of this mission was to look for safes that may contain a blast core. During this time I could fully see what power moves Cole is capable of doing and might I say they are very impressive. There are a variety of special moves that made me feel like I was invincible. After looking through a few safes and fighting a few conduits I faced yet another behemoth.

This behemoth was not as grand as the previous one I faced, but it looked pretty fierce. This ice monster was fairly easy to beat and once again I felt another God of War 3 moment when the monster was frozen; (no pun intended) I approached him, pressed R1, and started hammering away on the square button to expose his weakness. The level kind of ended with a cliff hanger, but I suspected that Cole may absorb an ice sphere or something and gain the power to freeze people (which could explain how he obtains his new powers but this is just one of my silly theories). Overall this demo played just as smooth as the first and it gave me the chance to experiment with Cole a bit more.

The entire experience I had with the game this evening is an unforgettable one and I still have chills thinking about my boss fight with that huge tentacally monster. inFAMOUS 2 has definitely lived up to it’s hype and is a day one purchase in my book.

Don’t forget to check out

demo that was also available at the media event today. Stay tuned to 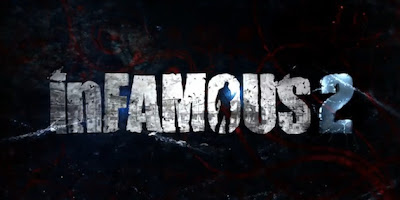 . Check out the shot below. 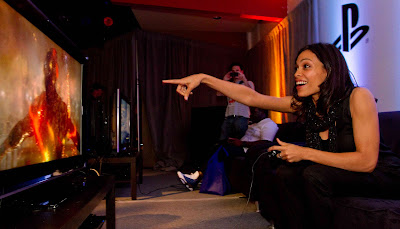 Another great thing about this picture is that Rosario Dawson is playing inFAMOUS 2 and she is easily in my top 5 most attractive women alive list. I can’t wait to have this game in my hands in a few months. If you have any doubt that is the beast in the picture, you should compare that image to the one shown below from inFAMOUS. 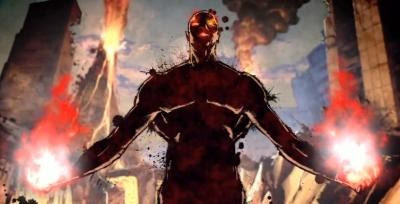 That proof is enough for me. Stay tuned to

Hello and welcome to a review by Dualshock Nexus. I’m WillGuitarGuy, and today I will be reviewing Assassin’s Creed Brotherhood, the third game in the Assassin’s Creed Series developed by Ubisoft.

So the story starts right off when Assassin’s Creed II ends. Desmond Miles along with Shaun, Lucy, and Rebecca head to monteriggioni to continue with their work finding the apple of eden and to avoid abstergo industries from finding them and the apple first. Now as the story develops with Ezio, Ezio and the Assassin brotherhood now have a new enemy, The borgia. The apple of eden is hidden, and Ezio must find the apple before the borgia do. As the Assassins plan to keep anyone from using the apple, the borgia plan to use the apple to their evil advantage, to try to take Rome for themselves.

Well how does this story compare to Assassin’s creed II? Well It tops the second game in the series actually. The story is more in depth. In Assassins Creed II there were side missions that didn’t do much at all when it came to giving the player more story that sunk well into the main story.There are more side missions that help discover more secrets, and events that happened In Ezio’s life that were not seen in Assassin’s Creed II. You can tell right away from the first cutscenes that this game was going to top its predecessor. The story in this game is polished and executed nicely.

Now the gameplay in this game is fun and better than before, but it is not perfect. The occasional frame drops in the first half of the game, looser controls compared to Assassin’s Creed II, and constant mission bugs and glitches, are annoying and can really slow the pace. With time put into the game, they slowly begin to be put aside so the player can then enjoy the experience smoother. Fast travel in this is the best executed so far. Overtime, the player can explore more and more of Rome to help renovate Rome by buying and fixing Blacksmiths, Doctor booths, banks and so forth. With these renovations you can collect more money depending on how much you’ve renovated. There’s architecture you can buy, Aqueducts you can fix, and even Borgia towers to destroy. Speaking of Borgia towers, each time one is destroyed, Ezio can recruit a new citizen to join the assassin brotherhood.

You can send these assassins on Contracts, to level them up and give them some skill. You can call your assassins at any time as long as the ability is available. So overall the gameplay isn’t perfect, but it feels way better than it did in the last game. Multiplayer on the other hand is decent at best. Nothing that wow’d me to give it that high replay value that should be given. Plus you get a crossbow, poison darts, a parachute, and you can go on jaw dropping missions destroying Leonardo Da Vinci’s War machines that he built for the Borgia.

Assassin’s Creed Brotherhood has by far the cleanest graphics for the series. With the occasional hiccups when rendering and seeing random people pop up in front of your character as you run, it kills the pace a bit. Cinematic cameras, cutscenes, and the overall look are excellent. Though not a lot on gameplay visuals look that different, besides extra work on buildings and structures. No building or background looks like a picture was added behind a green sceen. Extra lighting effects, smoke, dirt, and other particles feel better, this time around. No particles feel too animated, but well done.

With the soundtrack and ambiance that we all know and love, Ubisoft’s team do it again with cinematic, gameplay, and sound syncing. Nothing too new here though, but a couple new sounding tracks in Platforming Puzzle areas, and some boss battles, which give the game a bit more emphasis on battle. Overall, Assassin’s Creed Brotherhood is another great installment in the series with slight problems that don’t ruin the experience at all.

Brothers In Stahl Arms is a machinima created by two Dualshock Nexus members, WillGuitarGuy and Treezy504. Both Killzone 3 and LittleBigPlanet 2 clips are used.


The story is about an every day job at Stahl Arms that doesn’t go as planned. It revolves around Jerry; the sniper with  marital problems, and Frank the Helghast being the Infiltrator known as the office Jerk. We worked long and hard on this machinima.

A recent press release from Nintendo is stating that Xenoblade Chronicles will be heading to Europe and it will feature English and Japanese voice overs. This is exciting news for all the fans who have been waiting to play this RPG because now you can just import the game if you don’t live in the UK. You can read the press release below.

“Nintendo of Europe can confirm that it will be bringing the epic RPG, Xenoblade Chronicles to Europe for Wii. The title, already launched in Japan, brings to life a universe where two worlds called Bionis and Mechonis fight a war that knows no end.

Join the battle for Bionis to repel the invasion of a terrifying mechanical army and uncover the secrets of a mystical sword called the Monado.

Xenoblade Chronicles will be launching later this year for Wii featuring both English and Japanese voice-overs and will be fully subtitled in English, French, Italian, German and Spanish. Keep checking www.nintendo.dk for further information on this epic new adventure for Wii.”

Alright Killzone 3 fans the patch you have all been waiting for is finally here. Patch 1.04 is available for download right now.

Details in patch 1.04 were released about a week ago. The following feature’s list is brought to you by killzone.com